Episode 10-The Kama Sutru- More than just a sex manual 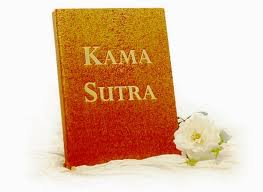 By Christie LaValley for Under the Covers on ipmnation.com
***This is in no way is an ad for sex.  These are suggestions for your personal life, not for office visits.
Wikipedia states “The Kama Sutra (Sanskrit: कामसूत्र

pronounciation (help·info), Kāmasūtra) is an ancient Indian Hindu[1][2] text widely considered to be the standard work on human sexual behavior in Sanskrit literature written by Vātsyāyana. A portion of the work consists of practical advice on sexual intercourse.[3] It is largely in prose, with many inserted anustubh poetry verses. "Kāma" which is one of the three goals of Hindu life, means sensual or sexual pleasure, and "sūtra" literally means a thread or line that holds things together, and more metaphorically refers to an aphorism (or line, rule, formula), or a collection of such aphorisms in the form of a manual. Contrary to popular perception, especially in the western world, Kama sutra is not an exclusive sex manual; it presents itself as a guide to a virtuous and gracious living that discusses the nature of love, family life and other aspects pertaining to pleasure oriented faculties of human life.[4][5]
The Kama Sutra is the oldest and most notable of a group of texts known generically as Kama Shastra (Sanskrit: Kāma Śāstra).[6] Traditionally, the first transmission of Kama Shastra or "Discipline of Kama" is attributed to Nandi the sacred bull, Shiva's doorkeeper, who was moved to sacred utterance by overhearing the lovemaking of the god and his wife Parvati and later recorded his utterances for the benefit of mankind.[7]
Content
Vatsyayana's Kama Sutra has 1250 verses, distributed in 36 chapters, which are further organized into 7 parts.[9] According to both the Burton and Doniger[10] translations, the contents of the book are structured into 7 parts like the following:
1. General remarks
Chapters on contents of the book, three aims and priorities of life, the acquisition of knowledge, conduct of the well-bred townsman, reflections on intermediaries who assist the lover in his enterprises (5 chapters).
2. Amorous advances/Sexual union
Chapters on stimulation of desire, types of embraces, caressing and kisses, marking with nails, biting and marking with teeth, on copulation (positions), slapping by hand and corresponding moaning, virile behavior in women, superior coition and oral sex,
Artistic depiction of a sex position. Although Kama Sutra did not originally have illustrative images, part 2 of the work describes different sex positions.
3. Acquiring a wife
Chapters on forms of marriage, relaxing the girl, obtaining the girl, managing alone, union by marriage (5 chapters).
4. Duties and privileges of the wife
Chapters on conduct of the only wife and conduct of the chief wife and other wives (2 chapters).
5. Other men's wives
Chapters on behavior of woman and man, how to get acquainted, examination of sentiments, the task of go-between, the king's pleasures, behavior in the women's quarters (6 chapters).
6. About courtesans
Chapters on advice of the assistants on the choice of lovers, looking for a steady lover, ways of making money, renewing friendship with a former lover, occasional profits, profits and losses (6 chapters).
7. Occult practices
Chapters on improving physical attractions, arousing a weakened sexual power (2 chapters)” 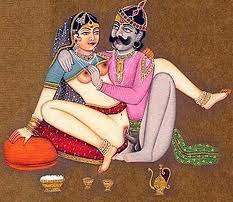 Many in the Western world wrongly consider the Kama Sutra to be a manual for tantric sex.[citation needed] While sexual practices do exist within the very wide tradition of Hindu Tantra, the Kama Sutra is not a Tantric text, and does not touch upon any of the sexual rites associated with some forms of Tantric practice.  However reading the translation of this book on http://www.sacred-texts.com/sex/kama/kama304.htm  one will find that the book talk a lot about love behavior, attitude about relationships and life than about  sex.
Chapter  three of part 1 talk about becoming attractive and useful.
A female, therefore, should learn the Kama Shastra, or at least a part of it, by studying its practice from some confidential friend. She should study alone in private the sixty-four practices that form a part of the Kama Shastra. Her teacher should be one of the following persons: the daughter of a nurse brought up with her and already married, 2 or a female friend who can be trusted in everything, or the sister of her mother (i.e. her aunt), or an old female servant, or a female beggar who may have formerly lived in the family, or her own sister who can always be trusted.
The following are the arts to be studied, together with the Kama Sutra:
A public woman, endowed with a good disposition, beauty and other winning qualities, and also versed in the above arts, obtains the name of a Ganika, or public woman of high quality, and receives a seat of honour in an assemblage of men. She is, moreover, always respected by the king, and praised by learned men, and her favour being sought for by all, she becomes an object of universal regard. The daughter of a king too as well as the daughter of a minister, being learned in the above arts, can make their husbands favourable to them, even though these may have thousands of other wives besides themselves. And in the same manner, if a wife becomes separated from her husband, and falls into distress, she can support herself easily, even in a foreign country, by means of her knowledge of these arts. Even the bare knowledge of them gives attractiveness to a woman, though the practice of them may be only possible or otherwise according to the circumstances of each case. A man who is versed in these arts, who is loquacious and acquainted with the arts of gallantry, gains very soon the hearts of women, even though he is only acquainted with them for a short time.
Only in part 2 does the book talk of sexual union.   For example in CHAPTER VI  it states:

“OF THE DIFFERENT WAYS OF LYING DOWN, AND VARIOUS KINDS OF CONGRESS 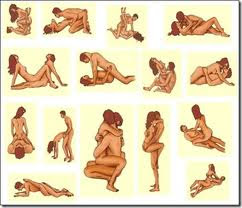 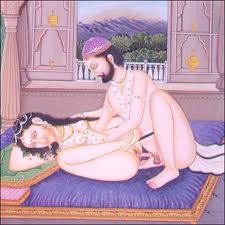 The position of the wife of Indra
When she lowers her head and raises her middle parts, it is called the 'widely opened position'. At such a time the man should apply some unguent, so as to make the entrance easy.
When she raises her thighs and keeps them wide apart and engages in congress, it is called the 'yawning position'.
When she places her thighs with her legs doubled on them upon her sides, and thus engages in congress, it is called the position of Indrani and this is learnt only by practice. The position is also useful in the case of the 'highest congress'.”
In part three Chapter iv it talks of how to pick love and a husband
“A girl who is much sought after should marry the man that she likes, and whom she thinks would be obedient to her, and capable of giving her pleasure. But when from the desire of wealth a girl is married by her parents to a rich man without taking into consideration the character or looks of the bridegroom, or when given to a man who has several wives, she never becomes attached to the man, even though he be endowed with good qualities, obedient to her will, active, strong, and healthy, and anxious to please her in every way. 1 A husband who is obedient but yet master of himself, though he be poor and not good looking, is better than one who is common to many women, even though he be handsome and attractive. The wives of rich men, where there are many wives, are not generally attached to their husbands, and are not confidential with them, and even though they possess all the external enjoyments of life, still have recourse to other men. A man who is of a low mind, who has fallen from his social position, and who is much given to travelling, does not deserve to be married; neither does one who has many wives and children, or one who is devoted to sport and gambling, and who comes to his wife only when he likes. Of all the lovers of a girl he only is her true husband who possesses the qualities that are liked by her, and such a husband only enjoys real superiority over her, because he is the husband of love.”
If you are interested in the sexual part of the Kama Sutra writing check out the book of Sex Therapist  Anne Cooper, who has written a great fully illustrated version of the Kama Sutra of  sexual union at http://www.scribd.com/doc/2626571/Kamasutra-Sex-Positions
One of the other  oldest texts about sex is  the Speculum al foderi, sometimes known as "The Mirror of Coitus" or literally "a mirror for fuckers", a 15th century Catalan text discovered in the 1970s

Other classical texts from around the world are: Health Benefits of the Bedchamber, Ishinpō,  I ching and even the bible for Christian sexuality.  (which should have killed off Christinity)

Wikipedia The free encyclopedia on line has a fascinating page about  sex positions and descriptions at :
http://en.wikipedia.org/wiki/Sex_positions  For example her is Wikipedia’s description of Doggy style 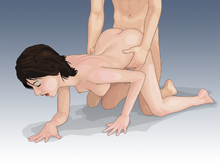