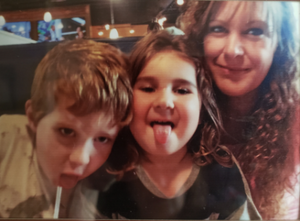 The anticipation of becoming a grandparent is exciting! You have fantasies of what a wonderful grandparent you will be, caring for the new arrival, buying cute clothing, spoiling the child with gifts, love, patience and then returning the child to the parents for the rest. What happens when your fantasies are squashed out like a bug on a windshield? What happens when one day you receive a call asking you to take the child(ren) into your home to raise?

Ann appeared to have it all, three dogs, two grown children with families of their own, three precious grandchildren, a rocky marriage but on the surface appeared loving, a three bedroom, two bath, two car garage home on an acre land with almost no neighbors; peaceful, a truck driving job she loved which allowed her to travel and admire new sites and meet people from all different walks of life. Ann’s younger daughter and boyfriend were living in her home with two grandbabies for free while caring for Ann’s three dogs and the house so Ann could be out on the road trucking. Yes, Ann loved her life even though it was rough being gone from her family for long periods of time.

One day the call came, the call that changed everything! Ann’s daughter hysterically crying with distressing news of domestic violence, abuse, and rape. Ann’s daughter frantically begging for Ann to return home. Ann’s heart instantly dropped, eyes swelled with tears, and lump in her throat replied, “I’ll be home as soon as possible, for now your grandfather can help you”. Ann took a leave of absence from work and returned home a week later.

Upon arriving home Ann noticed her house was a wreck! Decorations torn from the walls, furniture broken, kitchen doors bungied corded shut, several decorations broken, dogs were thin from not eating, clothes and dishes everywhere, and kids were locked in their room with their diapers duct taped onto them, and poop smeared all over the bedroom walls.

Two weeks after Ann started working she received a call from the daycare center stating the mother dropped the children off late and the granddaughter had been hit or run over by the mother and needed immediate medical care. Ann took her granddaughter to the emergency room where it was discovered her little body was riddled with scrapes, cuts, bruises, a 3 x 1.5 inch section of scalp torn away but luckily no broken bones. This incident initiated police and child welfare involvement and an emergency court hearing where Ann and her husband obtained full guardianship based on abuse, neglect, failure to protect, drugs, domestic violence, and sexual assault, of both grandchildren and parental rights where suspended/removed until the children were 18 years of age. The children were now safe from further abuse, neglect, and drug exposure in Ann’s care with both parents out of the home.

Ann’s husband left a few months after gaining guardianship of the children stating he no longer wanted the responsibility of raising children again, on top of chronic adultery, verbal, and mental abuse towards Ann herself. A year and a half later Ann was divorced where she and the children lost their home and was forced to move, which was a difficult one.

Unfortunately, such scenarios are played out throughout the states several times a day where grandparents are left with the decision of raising their grandchildren or allowing the children go into states care and placed into foster homes due to parents who are unable to or don’t want to care for their child(ren) forcing changes in the lives of everyone around them. The decision is not a light one to make. Grandparents and grandchildren must work through many emotions and the feelings of loss and abandonment.

Several states do not support grandparents rights which also creates stress and emotional trauma upon grandparents who are trying to do the right thing by their grandchild(ren). The constant legal battle, the enormous legal fee’s for lawyers, constant scrutiny by court appointed guardian ad litims, child endangerment division, and judges leaves grandparents feeling hopeless and used by the system. Laws must change, better financial/legal support systems and support groups in place for these grandparents who in many cases literally give up their entire lives in order to keep their grandchild(ren) safe.