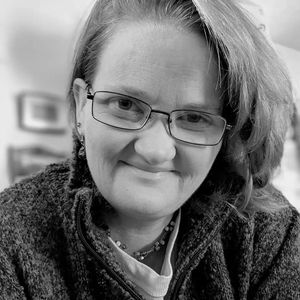 Tonight was a special night for all of us pagans, wiccans, and witches. We got to enjoy the dawning of Spring Equinox, the esoteric light of the Full Worm Moon, and the celebration of the Wheel of the Year's Sabbat Ostara. A point of perfect balance on the journey through the Wheel of the Year. Night and day are of equal length and in perfect equilibrium - dark and light, masculine and feminine, inner and outer, in balance. The natural world is coming alive, the Sun is gaining in strength and the days are becoming longer and warmer. The gentle whispered promise of Imbolc is fulfilled in the evident and abundant fertility of the earth at Ostara. The energy is expansive and exuberant. Ostara, also known as the Spring Equinox and the Vernal Equinox arrived tonight and coincides with a full moon. The Druids held a great reverence for the full moon during the Spring Equinox month, and when one fell on Ostara, it was a symbol of great changes to come and the start of spring!

The equinox is significant because it’s the time when night and day are of equal length and a time to celebrate balance in all things. Over the years, all kinds of pagan groups have used the Spring Equinox as a day for their rituals, festivals and rites. One of these ancient festivals which are still celebrated today is Ostara. This Anglo-Saxon pagan holiday celebrates the horned god and the spring maiden – which both of them representing the arrival of spring. Other symbols of this pagan ritual include eggs and rabbits – which spread to the Germanic pagan festivals Oester. Christianity would also borrow these symbols of spring for their Easter celebrations. However, these cultures weren’t the only ones which celebrated the Spring Equinox. One of these was the Mayans. The Mayan people of Central America celebrated the Spring Equinox for a millennium. When the sun set on the pyramid of El Castillo, Mexico it cast a long shadow that looks like a snake descending the staircase–what is called the returning of the sun serpent by the Mayans. Our Celtic ancestors would celebrate the arrival of Spring’s arrival many different ways, much as we do today.

Super Moon on the Spring Equinox

This full Moon is also a supermoon, meaning the Moon will be nearly at its closest to Earth for the month of March. It’s the year’s third (and final) of three straight full supermoons. This means that the Moon may “appear” brighter and bigger than normal, provided the night sky is clear and dark. Tonight we enjoy both the dawning of Springtime and the esoteric light of the Full Worm Moon.  The Druids held a great reverence for the full moon during the Spring Equinox month, and when one fell on Ostara, it was a symbol of great changes to come.  Our celebration tonight is focused on cleansing, releasing, fertility, and growth in all aspects of our individual and collective lives; Physical Growth of our youth, our livestock, our crops, and our herbs; Spiritual Growth so that we may see our truest selves, find peace in times of trouble, and release the darkness that creeps in our lives unexpectedly; and Emotional Growth to make us more compassionate, more caring, and better able to communicate with those who are in need of healing. Traditionally, the Moon we see in March is called the Full Worm Moon. At this time of the year, the ground begins to soften enough for earthworm casts to reappear, inviting robins and birds to feed—a true sign of spring. Roots start to push their way up through the soil, and the Earth experiences a re-birth as it awakens from its winter slumber. There are many alternative names for the March Moon. One name was the Full Sap Moon, as this is the time of year when the sap of sugar maples starts to flow.

Wheel of the Year: Ostara

Ostara takes its name after the Germanic goddess, Eostre/Ostara, who was traditionally honoured in the month of April with festivals to celebrate fertility, renewal and rebirth. The Goddess Ostara has the shoulders and head of a hare. As it is with most ancient celebrations, there are no surviving documents or specific rituals, but we do know that there are sacred sites scattered all over the ancient world which clearly show our ancestors observed the Equinoxes and Solstices. Our celebration of Ostara, or Eostre or Eastre, originates from the Anglo-Saxon Goddess of spring and dawn whose legacy is symbolized by the hare and the egg.  Ostara was a fertility Goddess and a Goddess of female purity.  She, like the Celtic Green Man, were the lords and ladies of nature; the Kings and Queens of the forests and the fields.  As we return to the ancient ways, our understanding of the Great Wheel continues to grow.

The story about Ostara and the first day of spring each year mentions how animals and children would come to the great meadow to celebrate with the Goddess Ostara to bring her gifts and offerings.  No one is sure when, but on one of those years, a young rabbit was preparing to make the great journey.  Being a creature of the earth, the rabbit had no possessions worthy enough to present to a Goddess, but the hare would not dare to insult the Goddess by arriving empty-handed and went to the forest to find something suitable.

While on his quest, the young rabbit came upon a fresh egg and was about to enjoy it as a meal, when he was hit with the realization that the egg would make a fine offering to the Goddess since it was a true representation of springtime.  But, because the egg was no different than any other egg, the young rabbit decided to take it home to decorate it first.  He wanted it to be special and worthy of offering to the Goddess.

On the first day of Spring, all the creatures were gathered, each taking a turn to approach the Goddess.  When it was his turn, the hare humbly approached with reverence and awe, and presented the now brightly colored egg to the Goddess.  She beamed at the beautiful egg; smiling down upon the rabbit, who was overwhelmed with relief.  In fact, she was so happy that she wanted everyone to have one, so they could feel the same joy she was feeling. She also saw the unselfish and gentle soul of the rabbit by presenting her with the egg rather than eating it, so she rewarded him and his entire species with a new life, of sorts.  From that day forward, rabbits would have the job of creating and delivering decorated eggs to children and animals across the land on the morning of the great festival of the spring.

Tonight we honor nature both in ceremony and practice as we celebrate the arrival of Spring’s arrival many different ways, much as we do today. With tonight's full supermoon, Spring Equinox, and Ostara, it was also an awesome night for other rituals, feasts, decorating altars, and blessings to be performed for fertility, new beginnings, fresh starts, prosperity, life. Starting seedlings for a garden and cooking a feast are ways to include the energy of the moon, Ostara, and the Spring Equinox.

As it is with most ancient celebrations, there are no surviving documents or specific rituals.  Likewise, there is no physical evidence of specific Ostara ceremonies or rituals, but we do know that there are sacred sites scattered all over the ancient world which clearly show our ancestors observed the Equinoxes and Solstices. Modern pagans gather on Ostara to celebrate fertility, to ask for prayers from the Goddess for good weather during planting, and to interact with nature as it comes to bloom.  Ostara is seen as a time when the fertile energy of the Earth once again awakens.  This is also the time of the Maiden as well as the time that the Green Man appears.  In the medieval times, the hare (rabbit) was a major fertility symbol and in March, they were reproducing and seemed to be everywhere, which is how they came to symbolize this Sabbat.

Each month, we gather to perform a full moon cleansing ritual; however since this month’s Full Worm Moon falls on Ostara, we’ll be adding a uniqueness that completes the cleansing process using the symbology of Ostara. The current full moon is in Libra, marking the beginning of a new cycle.  Starting today, we should begin to experience a strong feeling of peace and tranquility washing over us.  This moon carries a strong balancing energy; it can neutralize a negative environment through the creation of an unseen healing and harmonious curtain that surrounds us all.

Tonight we will be using eggs to perform a personal cleansing for each individual who wishes to engage.  Eggs were used in ancient ritual practices because they are very absorbent but also because they signify new life and fertility.  With a full moon on Ostara, this is perfectly appropriate.  We will use the eggs to remove and eliminate spiritual debris and negative energy, then further test to determine if we’ve succeeded or if we have additional work to do.

Springtime is also the best time for women to get a new besom and for men to get a new staff.  Ostara is a perfect night for consecrating and naming those new items.  Both are powerful tools used in magick, rituals, and other ceremonies and each should be named appropriately as one would name a familiar.  Tonight we shall honor this long-lost tradition by performing a consecration. The besom should have it’s name carved somewhere along the staff and never be used until consecrated.  Hold the broom at arms length and anoint it with an oil which you personally hold sacred as you  repeat this incantation while keeping your eyes focused on the moon.

Likewise, a staff must also be given a proper title.  History speaks of great deeds performed with a staff and it speaks volumes of the person wielding it and the process of engaging with a new staff before consecration should not be taken lightly.  As with the besom, the owner should carve the name of their staff somewhere along its length and take care to not touch the ground with the base of the staff until it’s consecrated.  If it’s a purchased staff, lay it on one side on the earth and pour sacred water along its length; bring it to the ceremony in a horizontal position and consecrate the staff as you turn the staff vertical as you bless it. Once the incantation is spoken, bring the bottom tip strongly to the ground in a single striking motion to complete the consecration.

As this evening comes to a close and we seal off out sacred circles. Let's take a step back to reflect on the many blessings that we asked Luna our full supermoon of march and Ostara the beautiful Goddess of spring and of life for. Many ways to help us to remember those blessings can be, either write down in our journals that we keep all of our private thoughts in. Create some type of arts to help us to reflect back on those blessings and to thank the goddesses for all that they have given us.