There are times when something hits you in the face, and no matter how much you may not want to, you have to accept that you messed up. Perhaps in words or deeds you made another feel awful in someway. It’s painful to admit mistakes, failures, or just plain meanness. That’s a hard thing to admit and to face, but something I have had to do many times.

Over the course of the last year I have learned a lot about myself, and I’m still having to face negative issues that I created. The reasons for the creations are valid and I don’t dispose of my own emotions or failures to handle life better. I know that we all have failings and sometimes we can handle something with grace, while other times we are the bull in the china shop taking out all the delicate hearts along the way, while blinded by fear, anger, and desire to not accept reality. The wanting to go back, to make changes, is painful and heartbreaking. Tears of guilt stream down my face as I have to come to terms with so many things, both past and present. The knowing of the future is far harder to handle, and to be honest I try not to think about it too much. There is peace to be had in coming to terms with events, and it’s hard doing so without the memories or pictures which go with them.

Speaking of pictures, I have seen some that I am in physically, but have not one spark of memory to associate with the photographs. Feeling my own decline, and seeing my own reflection is hard, but at the same time it gives me a lucky break, one that most don’t get. A chance to make right what was done wrong. You can’t undo your past, or change how you handled an event. However, you can own it, accept it as your own mistake and ask for forgiveness. That’s the easy part really. Harder still is forgiving yourself. Looking in that mirror and accepting that you failed, you hurt someone, or perhaps you made your own life worse in the misguided effort to protect yourself.

At the same time there are the happy moments that are in the past as well. Times when you made a memory that has stuck and has not vanished. I love remembering feeding the ducks with my dad, singing in school, and watching my own son graduate and move forward in life. There are moments when a shared hug with someone special is what holds your memory of them in a good place. Things like sitting in the car eating crazy combinations of food with my grandmom, or speaking from the well of the New Hampshire House with courage and resolve to do the best in representing so many people.

Having cognitive decline is horrible, it’s frightening and feels like weakness that no one ever wants to feel. I know I don’t want to feel it, but I do pretty much every day. I have to accept that my mind is not what it was and that it will not get better. That with time I will forget more, loose more, and hope that it doesn’t change me in a horrible way. I find myself following routines, perhaps in an unconscious effort to create a strong enough memory not to lose it. Even something as simple as the best place for a cappuccino; for me that has been a small family-run restaurant called The Republic that has seen me day after day, month after month, typing away at what I hope will gain publishment and perhaps help another, and maybe inspire change to occur in a positive way that creates a better path for all of us. Simply put, if one person now knows that they are not alone, I have succeed in my efforts to provide some measure of comfort to others.

I find myself thinking of relatives long passed these days. I miss those from my youth who represented love in my life. My Gram Gandin was an amazing woman. I loved to sit at her feet as she rocked in her chair and watch shows with her. Sometimes she would play with my hair and I would lean back into her leg with comfort and know I was loved. Gram wouldn’t so much as hurt a flea, and she was a proud, dignified woman. She carried herself as a lady in a way that reminded me of the royals. She was regal in her ways and always so kind.

When Gram became sick with Alzheimer’s Disease it changed her in ways that were horrible. She became violent, didn’t recognize people, and would be mean. The woman who wouldn’t so much as raise her voice, now would strike out with words and deeds out of character for her. I can only imagine the hell she felt as her mind failed her, and now I find myself having those moments too. I’ve blamed it on medicine, age, or being tired, but there have been times when a face before me doesn’t strike a chord. I’m told I should know them, but I don’t and it feels awful. It leave a sick sensation in the pit of my stomach enough to want to put on the sea-band and start sipping ginger ale to prevent puking.

It’s now happened more than once. The fact is that I have a neuropathic dystrophy; like what MD does to muscles, RSD does to my nervous system. My brain and spinal column are the main affected organ system. I had hoped that I had more time before I would see or feel a decline in my mental capacity, but I should be happy that i have had as long as I have.

People have told me things that I have said or done and I am horrified. I am embarrassed and ashamed of the things I have been told. Worse is that even with being told and given details, there is not one single spark of memory. Not a single moment of recognition, as if the day never existed. It’s terrifying to realize you have lost memories and moments. I cannot explain how horrible that feels, how scary it is to know that your mind is leaving you, the fear of what you could lose next. Could I lose memories that bring me joy, things that cannot be measured in fiscal value?

The truth is that no one can really know or tell me how bad it may or may not get. Perhaps I am a lucky one with only fragmentation and some higher function matters that are difficult to handle. Can it get so bad that people I hold near and dear to me become distant? In some ways it encourages me to write more, do more, or as much as my body will allow me to. There are moments though that I must admit to feeling depressed and overwhelmed with sad feelings and guilt.

I acquired RSD/CRPS (Reflex Sympathetic Dystrophy/Complex Regional Pain Syndrome) in part because of genetics, and the rest due to breast cancer. It was my second time being diagnosed with cancer and this time was so much harder. I was hiding so much at the time that I barely functioned. Being angry and distant kept others away from the truth and the shame that came with other people knowing thst home was not a safe place to be. I see others, some I formed relationships with, in support groups who are taken from this world too soon by the cancer that invaded their bodies. Those are the times that survivor’s guilt can hit hard.

Despite all that medicine can do, their lives have not been saved. They have families who love them too. It’s not that I or others like me are being self-loathing or wishing a bad thought on ourselves. It’s a form of guilt we have for living, for surviving longer than others. We feel guilty about every aspect of our lives that we want for others, that we wish with our whole hearts we could make possible. Are there thoughts of wishing to trade places with another? I’d be lying if I said the easy answer of “no,” but the truth is that there are moments. There are times when we feel another deserved to live longer than they did, that we had more than another and could be okay  with giving some time to another soul.

It’s not dark, it’s honest. It’s not horrible or frightening, it’s truth. We have to live in our truth, we can’t afford to sugarcoat things or events that just plan stink. Things that make you want to fall to your knees and cry out in agony “not another one,” that pain makes my chest feel even tighter and breath a bit harder to draw. Moments of raw emotion that no one who has not lived it can explain to another. There was a time as a healthcare provider, when I thought that  I “got it,” and even when my stepmom went through breast cancer, I thought I “got it” and that I had given the best support. Boy, did I not know shit.

I told my mom I was sorry, that I didn’t get it and wish I had handled things better; she in her neverending kindness loves me just the same, and never held a thing against me to begin with. It is me, it is my own guilt and shame that eats at my heart for not doing or saying the right thing at the right time. For failing to stand strong under pressure and instead crumbling to the ground in a heap of pain and darkness.

It takes a lot of hard work to change perspectives and work to bring joy back in those moments. In times of seeing no end in sight, there has to be hope. It’s hard at times to have that hope, having a disease first discovered in Civil War times, and still yet to have treatment options that do little more than just ease the symptoms, not cure the disease.

Knowing I am not alone in these thoughts both good and bad, that in this disease there are young and old, male and female, none who did a thing to deserve getting it, and all struggling to survive and have quality in life, not just a ticking time clock. Remember the simple things and allow pleasure in those things. Take ownership of all good and bad. Those are the biggest takeaways I have gained, and in them a comfort that I am being the best possible me I can be, and that is good enough. 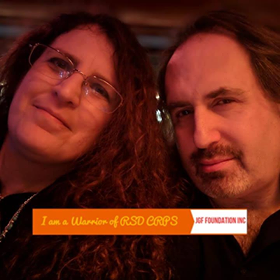